We are proud to have supported Semaan to be artist in residence at Astley Walk Newcastle.

Born in Syria, Semaan tells me he’s seen a lot of death and destruction in his own country too. His family fled Syria in the 1980s, settling in Beirut, Lebanon.

“I work with garbage. I up-cycle and recycle, because also there’s a big garbage crisis around the world, garbage in the literal sense and in the philosophical sense. In every sense, there’s a lot of garbage we’re surrounded by, garbage ideas, garbage practice.

“The world is not a safe place right now. It feels like a dump. There’s a lot of hate and a lot of garbage! So I try to take it all, put it all together, and turn it into something peaceful, an art piece.”

Semaan said he finds the freedom of birds alluring and inspiring. Birds feature extensively in his artwork.

As we talked, Semaan was working on an elaborate sculpture made of wires and plaster, and yes, garbage too. The piece featured a human torso, arms raised high, and a branch full of birds, doves.

“This piece is called The Flying Instrument of the Mind,” said Semaan.

“Sometimes you feel so heavy, with your head, and the restrictions, and the way life has been treating you. So maybe this instrument can help you fly. You know, if I can harness the power of these birds.”

We agreed, many people need wings to lift them higher.

Listen to Semaan and Jerome chatting in this PODCAST, 11 minutes. The chat does contain some adult content: 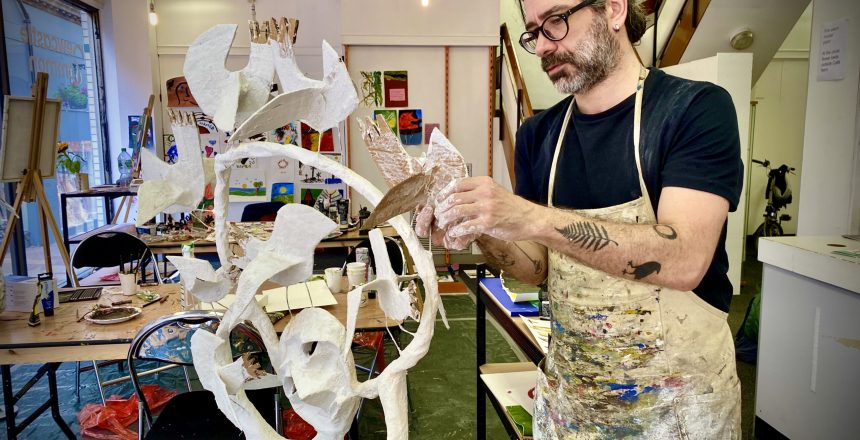